cultural symbolism of the Bust and its significance

Understanding the legacy of Nelson Mandela goes some way to explaining the symbolic significance of the Bust. In terms of his political career, few in the world are unaware of Nelson’s involvement with the anti-apartheid movement. It was Nelson’s tireless, and for the most part peaceful, approach towards an apparently insurmountable opposition, that drew not only wide spread support but also respect and which formed the foundations to his powerful legacy.

His commitment to the ANC and their fight for racial equality saw the beginning to his political career.

However in 1964 Mandela was arrested and began his twenty-seven year period in jail. On his release he said:

“As I walked out the door toward the gate that would lead to my freedom, I knew if I didn't leave my bitterness and hatred behind, I'd still be in prison.”

It was this ability to practice such forgiveness and patience that urged respect, and gained him wide spread support and four years after his release, he became the first democratically elected president of South Africa an achievement that was, in itself, historically significant.

Mandela’s political achievements were immense, but his legacy extends way beyond his political involvement. He became a symbol of hope for a better future not only for black South Africans but also for people facing inequality of any kind, across the world. The bust erected in his honour in 1985 makes reference to Mandela the symbol and not Mandela the politician and therein lies its power.

But why is symbolism such a powerful tool?

The role of Symbols in society

It is generally agreed that the functions of symbols in society are:

Indeed the extent to which symbols, and in this particular case, the Bust, fulfil their roles in society, is dependant on who is making this judgement. The broadness of his audience and supporters relates to this idea that symbols demand no explicit guidelines to which they must be appreciated, followed or interpreted. For the conservative government of the 1980s the erection of the Bust can be seen as acknowledgement and support to the anti-apartheid movement despite their initial opposition. Thus erecting the statue in commemoration of Mandela almost acts as proof to counteract this initial resistance. For supporters being or have been oppressed by racial inequality, the bust acts more of an acknowledgement of their struggle.

This freedom to interpretation is summarised fittingly in a quote from Mandela on the unveiling of another statue in 2007 at Parliament Square:

“Although the statue is of one man, it should in actual fact symbolise all those who have resisted oppression” 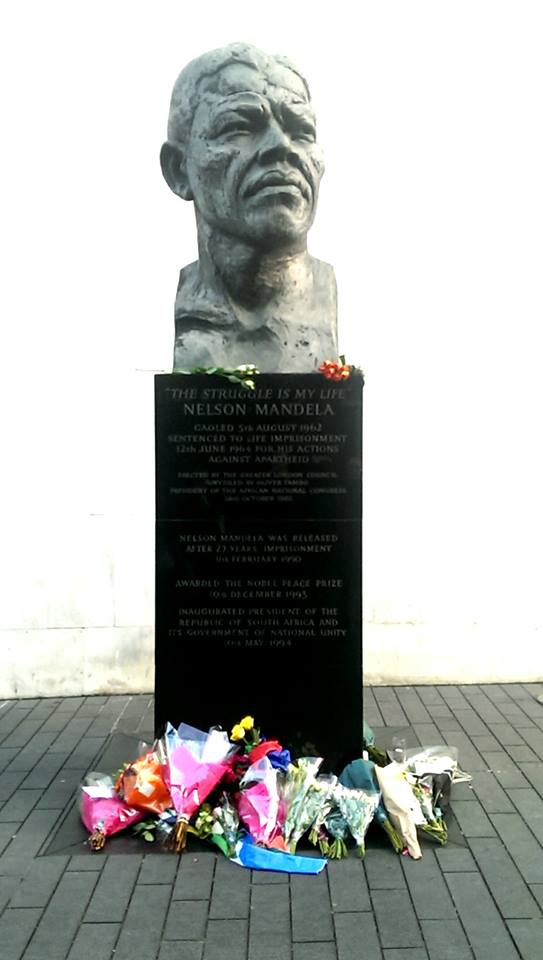 The photo above shows the Bust surrounded by flowers set there by supporters to honour Mandela (Credit: Time out) 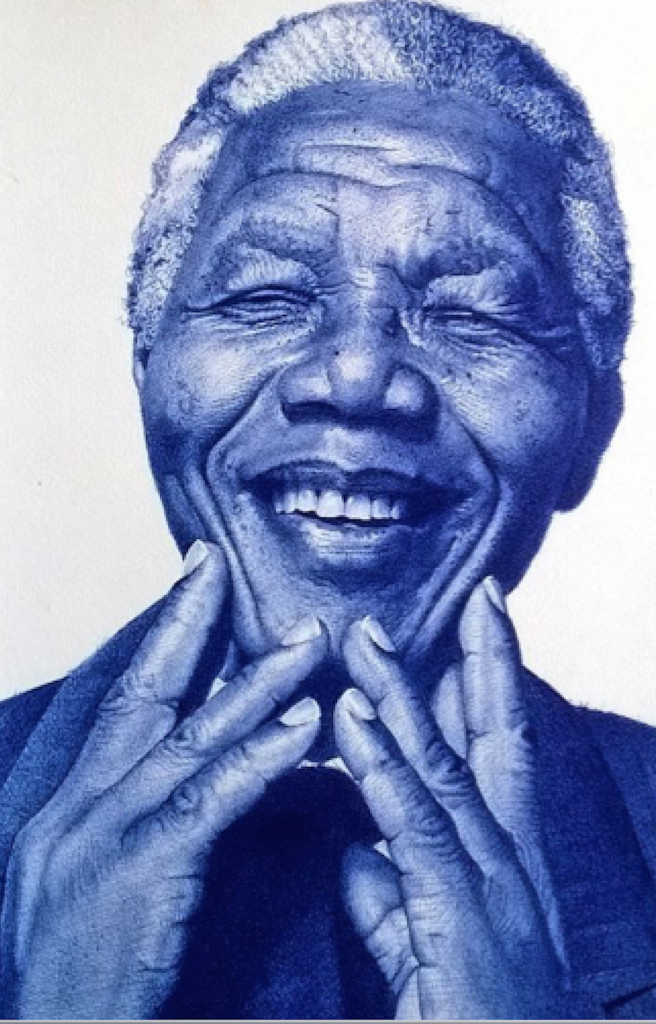 The photo above is a ballpoint drawing by Enam Bosokah. Artistic tributes to Mandela is another form of symbolism commonly used to honour and remember him. (Credit: The Mirror)

Parker continues his argument on statues commenting that most

If the Bust is compared to the work of Marco Cianfanelli, this idea that the statue needs an interactive element to more effectively fulfil its purpose is better understood.

The alternate by Cianfanelli, offers a dynamic relationship between the viewer and the object. The sculpture is of Mandela as he appears in a famous photograph taken by Jörgen Schadeberg on his first visit back to his prison cell, built where Mandela was arrested. For this statue, the viewer has to physically orientate him/herself to a specific perspective in order to see the image. This interaction engages the viewer in an historical juxtaposition forcing its audience to recall Mandela’s past.

Another question one could raise is the geographical location of the statue. In the latter example, Cianfanelli’s sculpture, at the site of Mandela’s arrest, allows a more raw insight into his past goading an emotional response. Similarly, the location of the statues in relation to others can also have effect on the symbolism. For example, does the Statue located at Parliament Square carry a greater significance than the bust located on south bank? Placing Mandela amongst the likes of Ghandi, Lincoln, ‘Richard the lion heart’, all, important historical figures, equates him to this importance and the power associated with them. In this sense, the bust perhaps has less of an obvious geographical importance, as it stands alone

Grant Parker, co-director of African studies at Stanford, argues that

yet around the world statues have been the primary mode of public remembrance- this must surely prove they are of some symbolic significance?

Similarly, just as Statues across the world positively epitomize Nelson’s legacy, opposition, and here the Bust, having suffered destructive acts throughout 1986 to the point of irreparable damage, is a perfect example of how this can also illustrate its significance. Simply, how can something able to aggravate such opposition to the point of physical damage, not be symbolically important?

More recently than the destruction of the first Bust, the statue of Cecil Rhodes in South Africa was also vandalised until it was taken down on the 9th of April 2015. Although the message differs between the opposition to the bust and the statue of Rhodes, the point remains; the statue was used as a target for the political, social or cultural frustration exactly because it was symbolic. In destroying it, repercussions resonated stronger through society because the act was a symbolic attack on oppression and exploitation wherever in the world it exists as well as being a specific reaction to the hypocrisy of celebrating an individual whose wealth was derived from acts of oppression and exploitation.

Through studying the legacy of Mandela and the roles of symbols in society we are offered a better insight into the role of statues and their symbolic significance. Statues around the world of Mandela stand as physical reminders and acknowledgement both of his successes, and of the triumph of the oppressed over the persecutor.

Pieterson. W., ‘What Nelson Mandela taught the world about leadership’, leader to leader 76(2015)