Ian Walters’s sculpture of Nelson Mandela, unveiled in 1985 and positioned on the walkway between the Royal Festival Hall and Hungerford Bridge, breaks conventional boundaries of the classical bust. Classical busts traditionally honour the subject by representing the person as heroic. They are conventionally characterised by their immobile features, captured most often in marble, bronze, terracotta or wood. Walters’s bust of Mandela is bronze. However, rather than following the classical conventions, its texture is grainy, earthy and mobile capturing the significance of Mandela’s relationship with the land and its indigenous people. The effect of the graininess is also of mobility. There is life in the bust and even a suggestion of the speeches for which Mandela goes down in history. It is worth pointing out that the other statue of Mandela (2007) in London, represents him speaking, arms raised in a gesture that is both rousing and inclusive. This representation of Mandela in the act of speaking contrasts with the other statues in Parliament Square of Smuts, Lincoln, Churchill and others who are more traditionally represented in isolation rather than in communication. Mandela’s importance as a spokesperson for South Africans and ‘The Struggle’ is therefore a vital aspect of the way the bust and statue commemorate him. 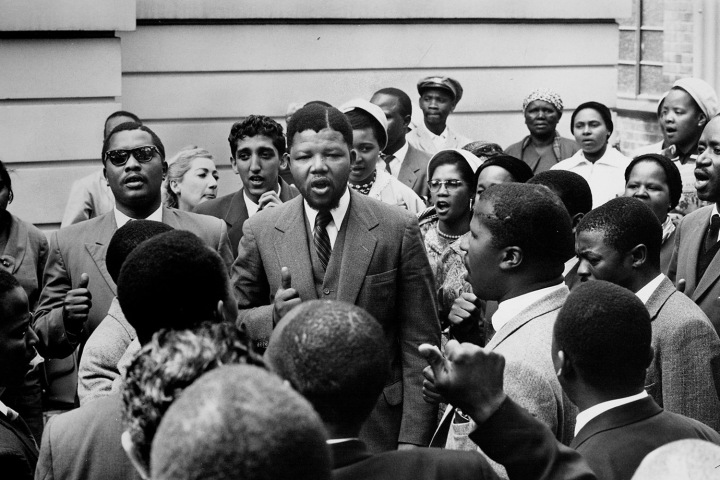 Mandela's journey with the ANC

The ANC grew after the election victory in 1948 of the Afrikaner-dominated National Party. Nelson Mandela had joined the ANC in 1944 and reacted to the introduction of a severely hierarchical system of racial classification and segregation with a zealous commitment to the struggle against apartheid. Apartheid policy codified existing racial segregation in public services, education and social interaction, legally removing and restricting the basic rights of people regarded as ‘non-white’. The black, ‘Coloured’ and Asian majority of South Africans were formally marginalised in society and barred from participation in white minority government. The ANC sought to gain full citizenship for all South Africans through non-violent methods such as boycotts, strikes and civil disobedience. Mandela organised protests across the country to expose and protest against discriminatory policies. He led the ANC’s 1952 Campaign for the Defiance of Unjust Laws and promoted the Freedom Charter, a manifesto by the Congress of the People, in 1955. In 1952, Mandela and Oliver Tambo opened South Africa’s first black law firm, offering cheaper legal aid and counsel for victims of apartheid legislation.

Mandela began to develop a more radicalised and militant approach to politics when he realized that passive resistance had little effect. In 1956, for example, several activists were tried for treason. Although they were acquitted in 1961, tensions escalated within the ANC, provoking militancy and the splitting off of The Pan Africanist Congress as a separate militant faction. The brutality of the response by police and government culminated in the Sharpeville massacre, in which the police opened fire on protesters, killing 69 people. Mandela’s militant approach was formed within a radical wing of the ANC. He justified militancy by describing it as the only solution when peaceful protests by ordinary citizens were met with barbaric institutionalised violence: “It would be wrong and unrealistic for African leaders to continue preaching peace and nonviolence at a time when the government met our peaceful demands with force. It was only when all else had failed, when all channels of peaceful protest had been barred to us, that the decision was made to embark on violent forms of political struggle” (Maxwell-Mahon and Titlestad, 1992, pp.155-156). Mandela visited Ethiopia and London to see Oliver Tambo in political exile, despite it being illegal for him to travel. He was arrested in 1964 on charges of committing sabotage against South Africa’s apartheid government and tried in the famous Rivonia trial. The speech he gave before being sentenced and imprisoned on Robben Island became famous for the humanity that the bronze bust on the South Bank captures. 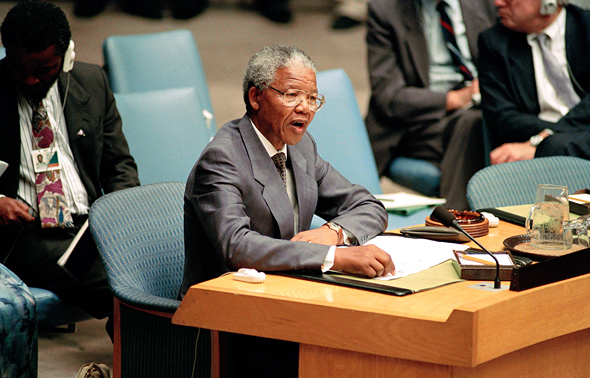 The Bust alludes to Mandela's expression and powerful presence (Source: The Guardian) 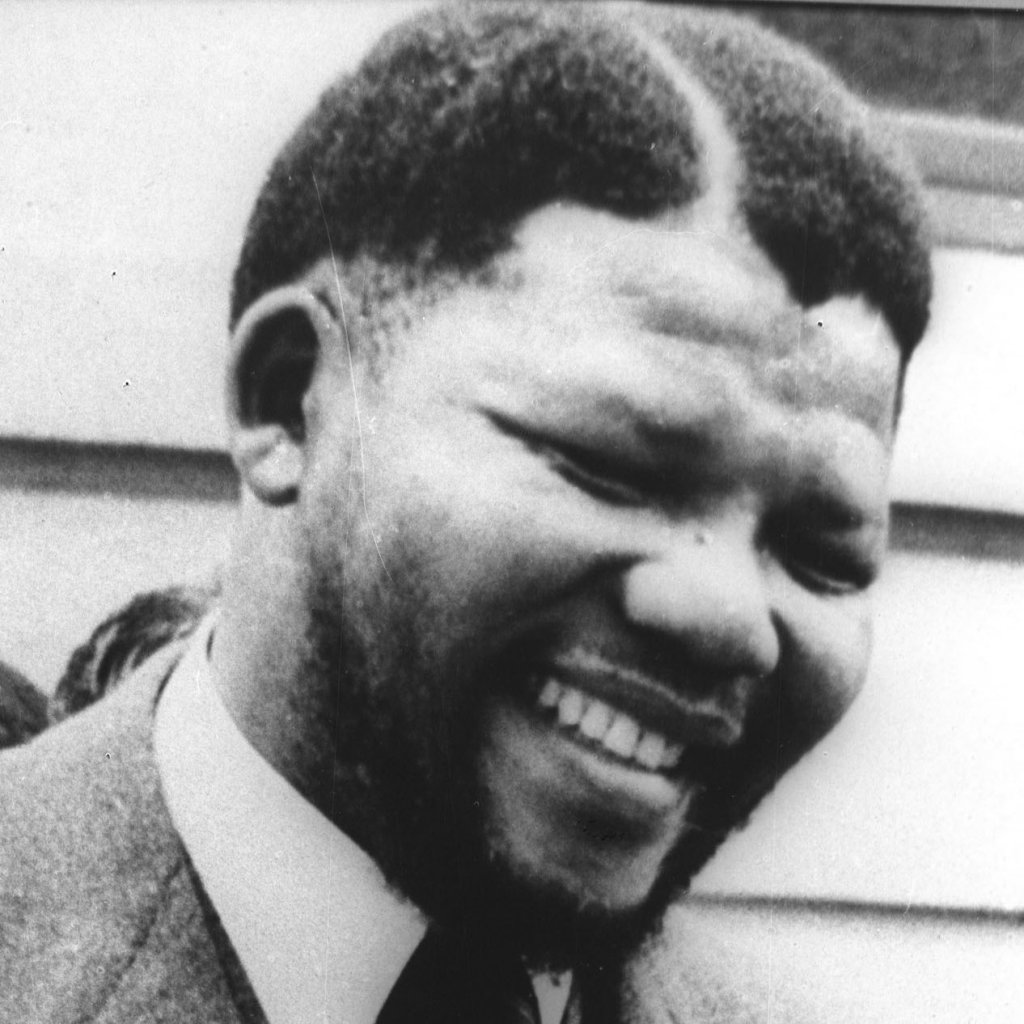 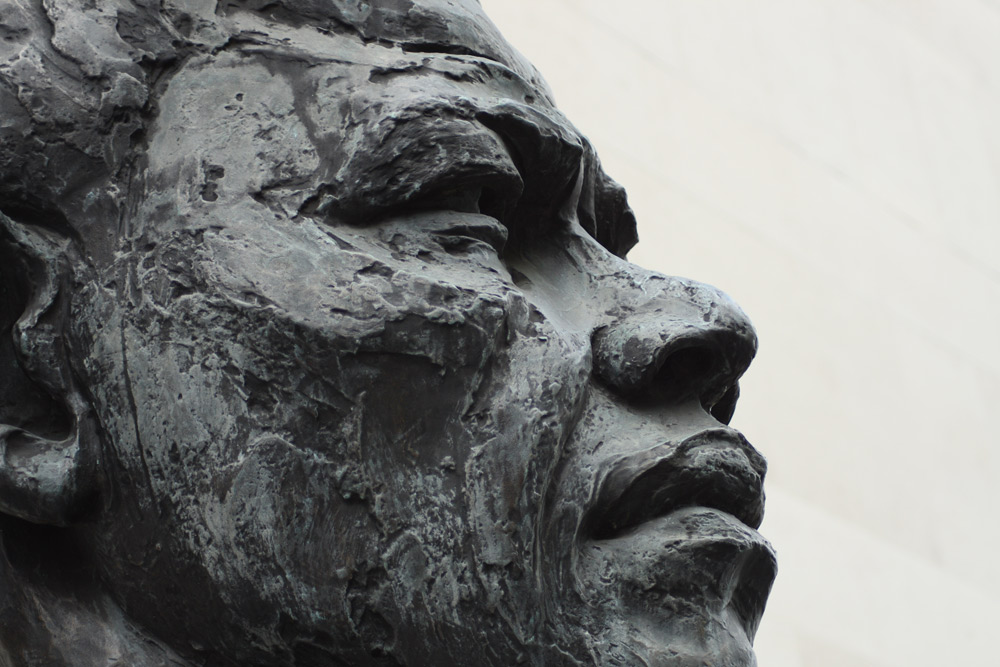 In Rethinking the Rise and Fall of Apartheid (2005), Guelke examined the "institutionalised hypocrisy" of America and Britain in their theoretical condemnation of apartheid, juxtaposed with their passive "behaviour in practice" (Guelke, 2005, p.18). He described the "difference between the rhetoric of the governments" and their limited actions. (Guelke, 2005, p.18)

Broun's examination of the Rivonia Trial considered Mandela’s defence of the alliance the ANC formed with the Communist Party. Speaking out for this alliance, Mandela claimed that “Although there is a universal condemnation of apartheid, the Communist bloc speaks out against it with a louder voice than most of the Western world” (Mandela cited in Broun, 2012, p.73). This is a statement as Broun observed that “must have sent shudders down the spines of most white South Africans – just as it would have most whites in the U.S or Great Britain” (Broun, 2012, p.73). However, as Mandela argued, “theoretical differences amongst those fighting against oppression are a luxury we cannot afford at this stage. What is more… for many decades Communists were the only political group in South Africa who were prepared to treat Africans as human beings and their equals: who were prepared to talk with us, eat with us, live with us and work with us” (Broun, 2012, p.73). 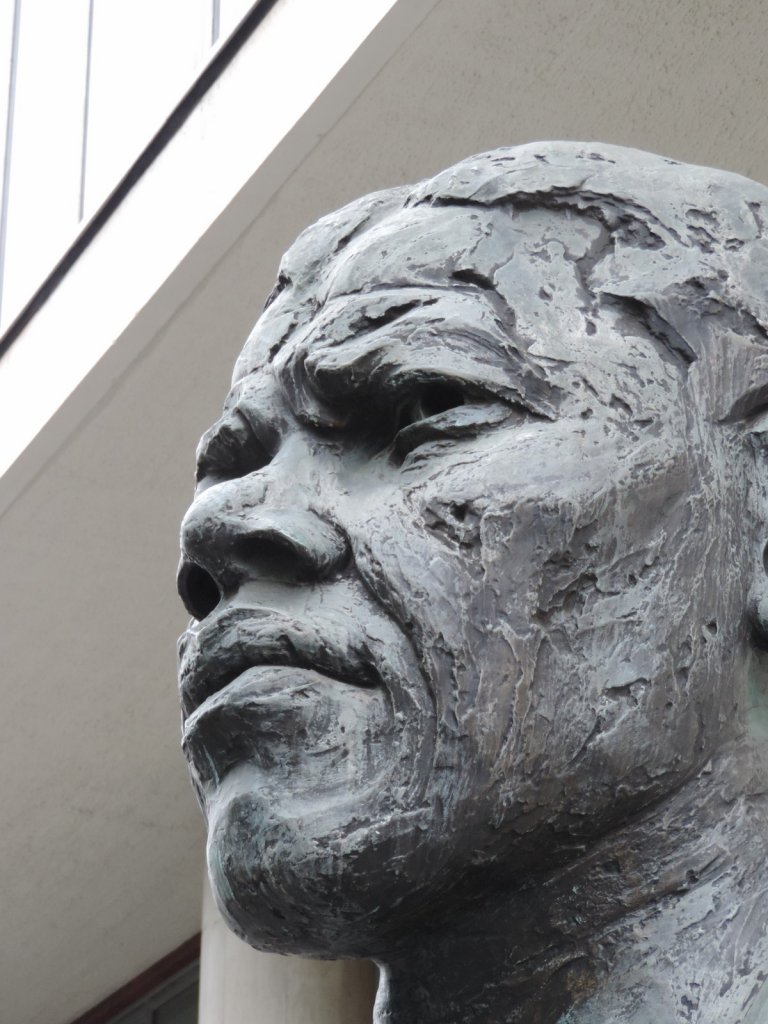 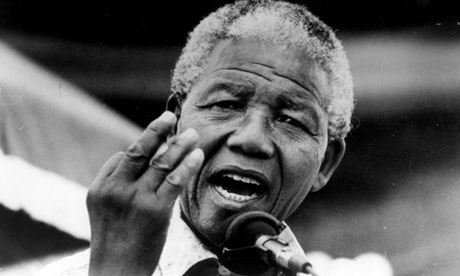 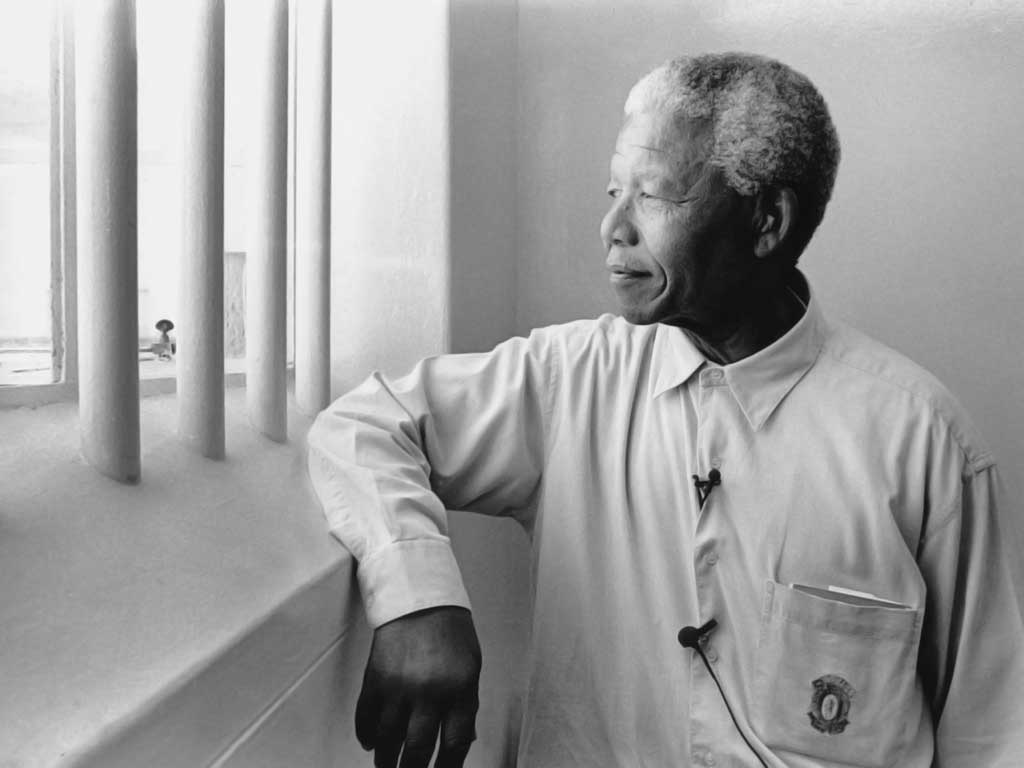 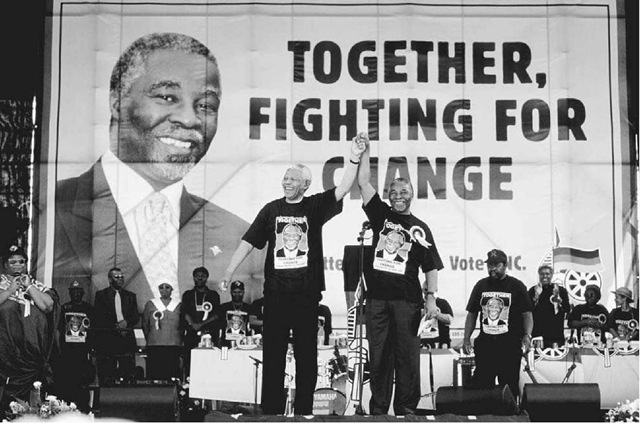 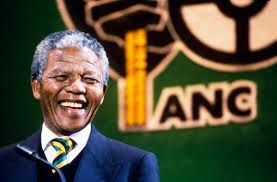 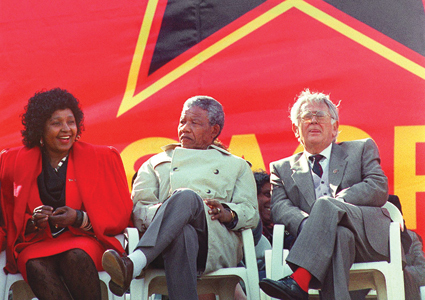 Connection with the land and the South African people (Source: The Guardian) 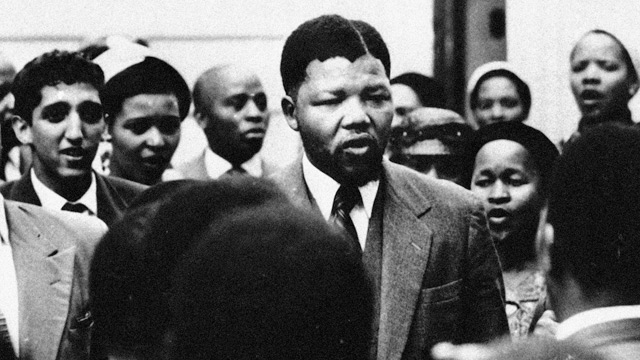 The Rivonia trial, which lasted from 1963-4, is historically important because it marked the South African government’s suppression of the ANC. When the trial ended, white minority rule in South Africa seemed invincible.  The charges included 221 acts of sabotage, ranging from guerrilla warfare to communist activity and accepting money from African sympathisers in Liberia, Nigeria, Algeria, Ethiopia and Tunisia, with the aim of overthrowing the apartheid regime. Mandela’s speech before sentencing became famous for the political ideals, moral fortitude and personal resilience that he himself came to represent. It confirmed his personal significance as the backbone of the freedom struggle in its darkest days. His rhetoric – the ringing repetition of what ‘Africans want’ – articulates reasonable, constructive demands: a living wage, variation of work, freedom not to live in government designated zones, ownership of land. He addresses issues of sexual inequality and racial oppression, depicting black domestic workers as having to hide in their rooms “like little children”, deprived of the dignity of normal family life. He analyses the consequences of state oppression: the ‘ghettoes’ that hide the poor, the effects of poverty caused by material deprivation and lack of welfare, ‘the breakdown of family life’ and its ‘secondary effects’. Children are not educated at school because they have no parents at home to send them, and if they do, the whole family is working to keep themselves alive. He calls for a ‘stake in society’ for all South Africans and highlights the injustice of being ruled by a government in which the majority has no say. The dangerous effect of this, he states, is a ‘breakdown of standards’, erupting in township violence, illegitimacy, social friction and deepening inequality.

Addressing the state in this speech, Mandela refers to the brutality of the 1960 Sharpeville Massacre. “Death sentences cannot cure the festering score”, he says. He also addresses white fears of revenge in the event of a democratic future. He promises equality not militancy should the ANC come to power, racial harmony and moral renewal rather than domination and vengeance. The rhetoric escalates to a deeply human uniting of racially oppressed South Africans. The repeated, objective call for what “Africans want” culminates in his identifying himself with his people: ‘We want … political justice’, meaning nothing less than ‘the right to live’. With this emotive climax, Mandela declares himself spokesperson for his people and country. Walters’s bust of Mandela captures this connection with the land and its people. Surrounded by the concrete modernist buildings of London’s South Bank, its warm, rugged texture refuses to blend in quietly. Nelson Mandela became a figurehead for all struggles for democracy and social justice. The bust is therefore appropriately situated in the cosmopolitan cultural environment of the South Bank. 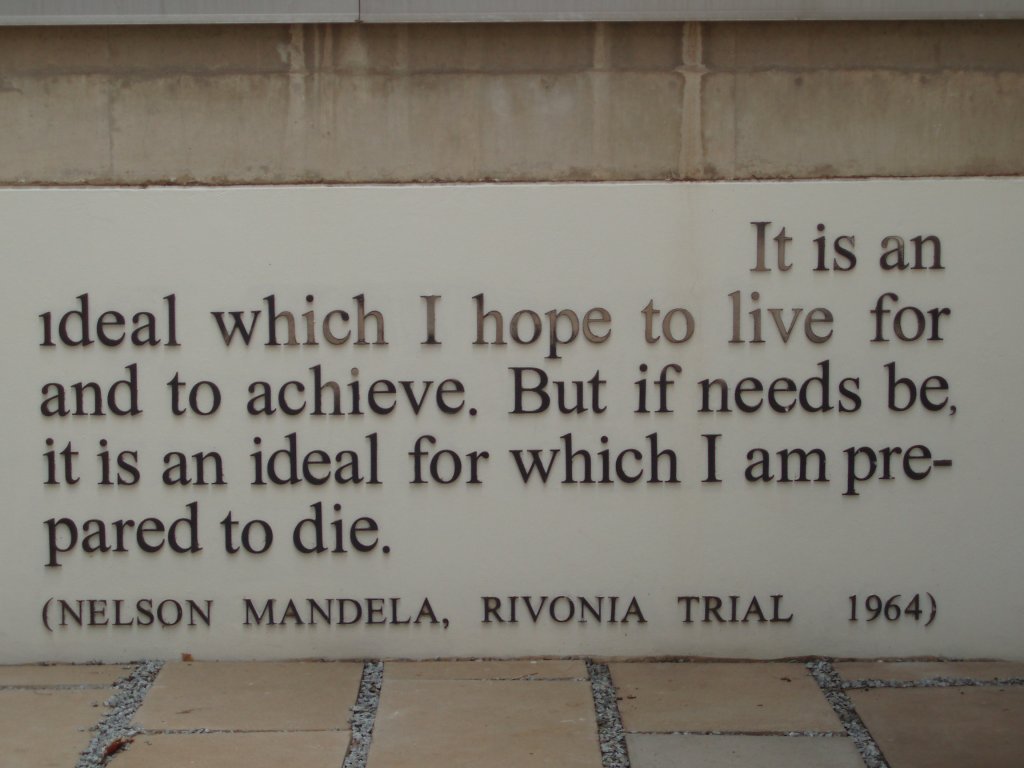 Guelke, A. (2005). Rethinking the rise and fall of apartheid. Houndmills, Basingstoke, Hampshire: Palgrave