An Introduction to the Danube Swabians

Danube Swabians, the ethnic Germans of Hungary Romania and the former Yugoslavia, are sometimes referred to as the newest German ethnic group.  That’s probably because they did not exist as an ethnocultural entity before the latter half of the 17th century. The primal event in history that led to their formation was an epic battle fought at the gates of Vienna on September 12th, 1683.  On that fateful day, the combined forces from the southern principalities of the German Reich, troops under King John Sobieski of Poland, as well as small Hungarian and Croatian contingents defeated the invading armies of the Ottoman (Turkish) Empire. This put an end to the gradual encroachment of Islam into Christian Europe. In the subsequent four decades, German forces under the brilliant leadership of Prince Eugene of Savoy, a Frenchman in the service of the Austrian Crown, drove the Turks out of the Habsburg territory they had occupied for over 150 years.

Turkish misrule had turned much of the countryside into a vast wasteland, mainly inhabited by nomadic herdsmen who lived in dugouts on the plain. There were also no roads or permanent bridges. Unbelievable as it may seem today, this part of Europe was as undeveloped as many regions of North America were at that time.

After the final peace treaty was signed between the Austrian and Ottoman Empires at Karlowitz in 1722,  it became obvious to the Imperial War Council in Vienna that the territory could not be held unless it was populated by loyal subjects of the Habsburg crown.  At the behest of Prince Eugene, the German/Austrian emperor, who was also King of Hungary, promulgated an ”impopulation” edict to colonize and develop the depopulated regions of Hungary.  Imperial heralds were sent to the southwestern German speaking areas of Europe, to the Palatinate, Lorraine, Alsace, Luxembourg, Wurttemberg, as well as other areas to induce would be settlers to settle in the Habsburg crown lands in Hungary with promises of personal freedom, land grants, establishment credits, and tax exemptions of up to ten years.  This offer by the respected house of Habsburg fell on receptive ears in an area where French invasions and recent crop failures had caused much suffering.  Thousands pulled up stakes and headed for embarkation points along the Danube, such as Ulm, Donauworth and Regensburg, where they boarded specially built barges (called Ulm crates) to float to their promised land along the Middle Danube, with a required stop at Vienna to be assigned to their settlement areas and to receive their travel and land grant documents. The trip took about two weeks. Since the motive power of the barges was the current of the river and it flowed only one way - there was no turning back!  Besides, the barges were dismantled upon arrival because the timbers from the forests of Germany provided valuable building material on the treless plain.

From 1683 to 1790, three major German migrations were sponsored by the Habsburgs; the first took place under Emperor Charles VI, the second from 1740 to 1780 under Empress Maria Theresia and the third under the enlightened Emperor Joseph II from 1780 to 1790

Left to themselves, and communications not being what they are today, the settlers soon lost contact with their places of origin and adapted to the new surroundings.  In the following centuries, they developed their own customs, culture, and unique language, an amalgam of various southwestern German dialects.  The German settlers founded over 1000 unique agricultural villages which were purposely located among those of other nationalities so that the expertise and work ethics of the Germans would be emulated by others.  The houses were all designed in Vienna and, in most cases, were erected before the arrival of the colonists. They in turn had to help build houses for later arrivals. No one was displaced and the colonization of the Habsburg crown lands was probably the most orderly and peaceful settlement of virgin land to have occurred anywhere, in any age.

Although favored as artisans and farmers, the Germans invariably received the worst land, more often than not swampy areas endemic to malaria.  More than half of the original settlers perished from this disease.  In Germany, Hungary became known as the graveyard of the Germans.  But the survivors were a tough lot and prevailed over the elements.  They built levees along the great rivers to prevent them from overflowing, drained the marshes, introduced the steel plough to the virgin soil of Hungary, planted orchards and vineyards, Mulberry trees along village streets to sustain a thriving silk industry, used the remaining marshlands to grow the hemp to make rope and linen.  They also introduced crop rotation, and selective livestock breeding to the region.

Not only in agriculture did the Danube Swabians excel, but they also helped develop the cities of Hungary which, until the middle of the 19th century, were decidedly more German than Hungarian in character.  In Budapest, for instance, the beautiful classical buildings as the Parliament Buildings, the National Theater, the Bourse, the former Royal Palace, the Millenium Monument and original bridges across the Danube, that are shown with pride to tourists from all over the world as Hungarian achievements.  These are mainly the creation of Danube Swabian architects and engineers, and Danube Swabians throughout the world have every right to take pride in these achievements of their compatriots in a land whose Communist rulers deprived them of their legacy by deporting them and covering up their achievements.

Royal Hungary’s preeminence in mathematics, medicine, and the arts and sciences, education  etc.,  was mainly due to people of German origin.  Hungarians such as Franz Liszt in music, Ignaz Semmelweis, the Saviour of mothers in medicine, the architects Emmerich Steindl, Haussmann and many others in every imaginable field of endeavor brought honor and renown to the name of Hungary.

In the wake of the Hungarian Revolution, the young emperor Franz Joseph feared that the Habsburgs might lose Hungary altogether.  So, in 1867 a compromise was reached, the so called Ausgleich (Equalization), the union of two major Habsburg realms to form Austria-Hungary.  In the process, Hungary became virtually independent, united with Austria only in the person of the emperor/king.  Franz Joseph I was forced to accept a union which gave the Magyars (48% of the population) predominance over all other nationalities in the country.  In the process he signed away some of the rights Emperor Charles VI had granted the German colonists.  By 1905 German, which had been language of instruction in German communities, was replaced with Hungarian.  No one could get a job with the government, the railways, or other national institutions, nor take part in the Olympic Games without adopting a Hungarian name. Consequently, the Danube Swabian community lost many of its more educated members.

From 1867 to 1918, Greater Hungary made enormous strides in agriculture and industry.  Largely due to the Danube Swabians, this former backwater of Europe became a Western-oriented society, a major breadbasket of the world and an emerging industrial power

Prior to 1918, the story of the Danube Swabians was intertwined with the history of Hungary.  However, Hungary was on the losing side in World War I and lost 2/3 of its territory, which was rightfully awarded to the newly created states of Romania and a royal dictatorship called Yugoslavia after 1929.

The partitioning of Hungary split the Danube Swabian settlements among three mutually antagonistic states.  700,000 remained in Hungary, 350,000 became ”Romanian”, and the remaining 550,000 became the German national minority in Yugoslavia.  This was a heavy blow to the cohesion of the Danube Swabian communities which caused enormous social as well as economic problems - not to speak of having to owe allegiance to alien powers with which Hungary had only recently been at war.  Farmers found that their fields were across the border and not readily accessible.  In some villages, the border ran through the middle of the main street and people could no longer attend their parish church or school because these were now in another country.  But, Danube Swabians are adaptable, and in time people adjusted and life went on, albeit not always the way most would have liked.

The biggest blow to the existence of the Danube Swabians came in the latter part of, and the aftermath of World War II.  At the Potsdam Conference, Allied leaders sanctioned the expulsion of the Danube Swabians from Hungary to war ravaged Germany. Only about 250,000 remain in Hungary.  In Yugoslavia, those who had not fled before the arrival of the Red Army were exterminated by Titos Partisans. In Romania in the 1980s, the land generations of Danube Swabians made arable was expropriated by the state and collectivized.

Danube Swabians are now scattered over four continents and have become good citizens of at least a dozen countries including the United States of America.  They are, of course, not newcomers to America.  German Hungarians, as they were called before 1919, have been coming to America since before the turn of the century, between the World Wars, and after World War II.   They settled in the cities of New York, New Jersey, Michigan, Ohio, Illinois, Wisconsin, and later California.  They were among the early settlers in the West and founded several villages on the prairies.  In major cities, they established cultural centers where they try to keep their customs traditions and language alive.  Since the roots to their native soil have been severed, this is not an easy task.

The Danube region benefits from various cultural influences consequence of the different nationalities sharing this common geographical sphere. In this enmeshment of cultures, the Danube Swabians have played an important role, with distinct marks on the culinary, vestimentary, architectural, linguistic, economic and political dimension of the region. Elements of german communities' 'tracht' have been adopted in the wider, host communities, while the combination of food and drink, with disputed origins, have become definitory of some of them, an example of which being the nickname for the Danube Swabians as 'Paprikadeutsche'. One aspect in which german communities in Danube countries have had a major impact is the urban architecture. Austrial architectural currents have been imported into the majority of the Danube capitals and major cities, creating even a certain template for the Danubian City, in the image of Wien. Furthermore, exceptional german/austrian people have managed to establish themselves and have a more direct influence in their fields, in the host Danubian nations. Illustration of this is the case of Georg Weifert, developer of one of the most famous beers in former Yugoslavia and recent Serbia, who later became an important banker and politician in Belgrade and currently features of the Serbian 1000 dinar note. 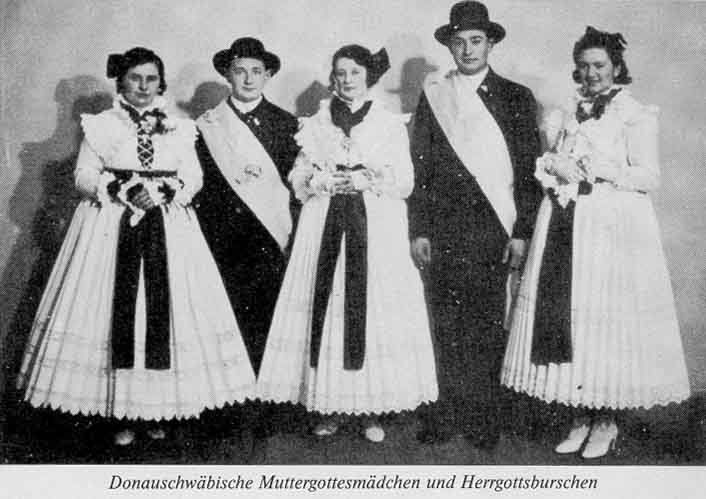 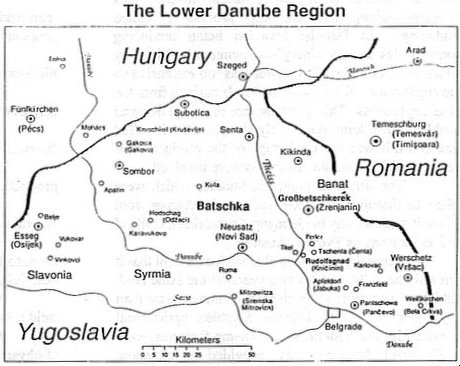