The Danube's mighty waters flow full in the early summer, but meagerly in autumn from Ulm to Vienna. These variations in flow are a result of its many tributaries and the melting snows of late spring. The water is a milky white color during times of spate, and brown the rest of the year.

The Danube and its tributaries form many diverse riverine habitats, including intricate networks of waterbodies, creeks and channels, floodplain forests, water meadows, lakes, gravel islands, sandy banks and the unique delta habitats by the shores of the Black Sea. These habitats house a mix of wildlife, with about 2,000 vascular plants and more than 5,000 animal species, including over 40 mammals, about 180 breeding birds, obout 100 fish species, a dozen reptiles as well as amphibians.

The floodplains and wetlands of the Danube basin are highly productive ecosystems and provide habitats for many species, including endangered ones. They are uniquely valuable ecosystems in European and worldwide. However, wetlands are sensitive ecosystems that can easily suffer from degrading riverbed erosion, pollution, intensive forestry, hunting and intensive recreational use, as well as measures for flood protection, agriculture and navigation.

Over the last two centuries, the activities of over 80 million people affect the environment of the Danube River Basin, leading to problems with water quality and quantity, and significant reductions in biodiversity. Changes to the river profile and width, water depth and flow velocity following the construction of dams, dikes, weirs and canals massively disturb the aquatic environment by disconnecting animals from their spawning grounds or otherwise degrading their habitat. Migratory species such as the sturgeons cannot reach their spawning grounds and their habitats in the middle and upper Danube River Basin, due to river continuity and habitat interruption. The remaining large floodplain forests and the Danube Delta become the last refuges in continental Europe for the white-tailed eagle and the white pelicans.

Fish Fauna of The Danube

The fish fauna of the Danube is well known from historical studies (Marsilius 1726; Heckel and Kner 1858). The total number of fish species along the whole course is in the order of 100 species. The generally high diversity is due to the zoogeographical significance of the Danube as a major migration route for a diverse Central Asian and Ponto-Caspian fauna (Balon, Crawford and Lelek 1986). From an ecological point of view, this diversity is due to rhithral conditions in most of the Upper Danube and potamal conditions in alluvial zones with extended floodplains and rich habitat downstream from Austria.

Balon (1964) provided an overview of the distribution pattern of individual species along the river course. Diversity increases in the Upper Danube from the rhithral sections downstream to the extended alluvial plains in Austria. Highest diversity is found in the transition zone between foothills and lowlands, where the gradient change results in an extended braided network of numerous side arms of the Danube. High habitat diversity and the dense ecotonal structure have created the diverse combinations of environmental conditions suitable for the assembly of different fish species (Schiemer 2002; Ward et al. 1999)

During the last 10 years a number of new fish species have been recorded upstream and downstream of the Devin Gate, apparently immigrants from brackish water. Until 1990 in the Upper and Middle Danube the gobiids were represented only by the tube-nosed goby Proterorhinus marmoratus. In 1994 Neogobius kessleri was discovered in the Upper Danube. More recently three further species, N. gymnotrachelus, N. melanostomus and N. fluviatilis, were discovered downstream of Vienna. Recent ichthyological studies demonstrate the role of the Danube as a dispersion corridor (Kautman 2000, 2001; Wiesner, Spolwind, Waidbacher et al. 2000; Strásai and Andreji 2001).

There are over 80 million people from 19 countries sharing the great resources from the Danube river basin. Beside the positive actions of developing the area into what we know nowadays, there are certainly some impacts on the natural environment, which are also leading to serious problems affecting not only the wildlife habitat but also human lives along the river.

There is still too much inadequately treated waste water ending up in the river, putting at risk the drinking water supply for millions of people. It also leads to problems regarding irrigation, fishing, industry and tourism.

The main pollution problem comes from the excessive volumes of nutrients entering the river, mainly from agricultural fertilisers, and unthreatened or not adequately threatened municipal sewage, including facies and household products.

Further, organic pollution can cause significant changes in the oxygen balance of rivers and lakes. As a consequence this can impact the composition of aquatic species. Organic pollution is mainly caused by untreated or only partially treated wastewater from cities/villages,  industry and agriculture. Many agglomerations in the Danube River Basin have no, or insufficient, wastewater treatment and are therefore key contributors to organic pollution.

Hazardous and toxic substances are also a major threat, made worse by occasional industrial accidents or floods when deadly toxins may be flushed directly into watercourses, affecting the lives of many creatures living in the river.

A recent analysis also shows that surface waters suffer significantly from hydromorphological alterations, which is the change of river flow patterns and hence the deposition of sediments. These have caused a lot of disturbance of natural habitats, disconnection of adjacent wetlands/floodplains, and in the future any infrastructural constructions along the sides of the river can also impact the water status.

It is assumed that the effects of the floods that impacted the countries in the Danube basin in the last years were worsened due to deforestation, the destruction of natural floodplains and human-induced global warming.

Preserving the natural habitats of the many species living in the basin is a constant struggle. The habitats of pelicans in the Danube Delta and sturgeon species are particularly under threat.

How Should We Protect

The commission became active in 1998. Since then, it has grown into one of the largest and most active international bodies of river basin management expertise in Europe. The commission deals not only with the Danube itself, but also with the whole Danube River Basin, which includes more than 300 tributaries and the ground water resources.

In the Danube River Basin District, all countries (including non-EU member countries) have been working on their national management plans. As these plans need to be established for each river basin, the countries are also cooperating on the international level. 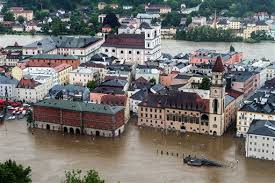 Increased peak flood flow occurs where rivers have been cut off from their natural floodplains, are confined to a man-made channel, and where houses and industrial sites have been constructed in areas that are naturally liable to flooding. Changes in land use in rural and urban areas can also worsen floods or their effects.

Over the period 1998–2000, different parts of Europe suffered about 100 serious floods, causing some 700 fatalities, the displacement of about half a million people and at least EUR 25 billion in insured economic losses. These floods inundated an estimated total area of one million square kilometres, including areas that were flooded more than once. Around 1.5% of the European population were directly affected by flooding.

Impacts caused by the 2002 floods in the Danube River Basin:

Floods in Bavaria affected the Danube from Regensburg to Passau, and many tributaries including the Inn, Traun, Salzach and Regen. Thanks to flow regulation structures, the negative impacts of the flooding were substantially reduced. The utilisation of reservoirs at Dillingen and at Ingolstadt helped to reduce flood peaks considerably. The extent of damage to infrastructure and private properties amounted to 230 million Euro.

Lower and Upper Austria and Salzburg suffered worst from the floods. More than 10,000 homes were damaged, infrastructure was destroyed, and the total cost of infrastructural rehabilitation is expected to amount to €232 million. Preliminary estimates of the total damage amount 3.1 billion Euro.

In 2006, a serious spring flood occurred in the Danube River Basin - the result of specific meteorological weather conditions. Heavy floods inundated Central and Eastern Europe due to melting snow and heavy rainfall. Swollen rivers and rising groundwater levels caused widespread damage and forced thousands to leave their homes. For the first time in history, high water was recorded on the Danube, Sava, and Tisza at the same time – this rare coincidence caused an extreme flood event in the main Danube (primarily in the Central and Lower Danube reaching a 100-year return period).