(Hungary) Ruin Pubs This page is part of the collection '(Hungary) Culture and the Hungarian Danube'.

Szimpla Kert (Simple Garden) is not only amongst the oldest ruin pubs of Budapest, but perhaps also the most famous one. In 2001 Budapest’s first ruin pubs, the ‘Little Szimpla’ and Szimpla Kert, were established. The Szimpla Kert has a quirky collection of furniture and decorative items: a table made from an old Trabant car, a bench that used to be a bathtub, tiny and old TV sets and other curiosities. Events regularly hosted by the Szimpla Kert are open-air cinema, film festivals and art exhibitions. For fans of the Szimpla Kert the Szimpla Café or its unit in the Gärtnerstrassen in Berlin are particularly recommendable. 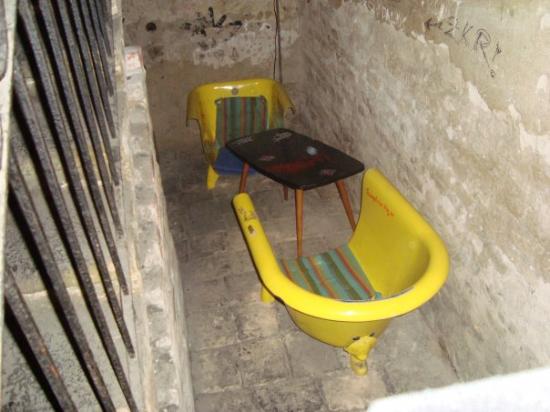 This ruin pubs takes its role as communal cultral centre particularly serious. Having opened quite recently, in 2010, it has since then highly contributed to the gentrification of the seventh district and especially everything in the direct vicinity of Klauzál tér. Since this ruin pub is not as well known among tourists as the Szimpla visitors tend to come from the surrounding area.