(Hungary) Sziget Festival This page is part of the collection '(Hungary) Culture and the Hungarian Danube'.

History of the Sziget Festival

The Sziget Festival, translated as the Island Festival, began with an idea by muscian Péter Müller  and manager Károly Gerendai who felt the need for a large festival that would attract younger tourists to spend their summer holidays in Hungary, attending concerts and having fun together. The festival would also fill the hole left by socialist summer youth camps that disappeared as a result of a change in the Hungarian political system in the 90s. In their search for a location for such a festival, Müller and Gerendai presented the idea to the city of Budapest and recieved a supportive response. Óbudaisziget ("Óbuda Island", or "Old Buda Island") otherwise known as Hajógyári Island ("Shipyard Island", for the shipyard that once operated there) turned out to be the perfect venue as a central location located in the Hungarian Danube yet slightly separated from the neighborhood and easy to guard.

The spring of 1993 saw the formation of Sziget Ltd and in August, the first Sziget named Diáksziget or Student Island received 43,000 visitors, majority of which were Hungarian, coming together to celebrate music. A total of 200 concerts held on 2 stages, 80 movies shown in the open-air cinema and 40 theatre productions were held during this first Sziget. This first Diáksziget also had the privilege of having the president of Hungary as the patron of the event. Despite the success of this event, the first Sziget ran well over budget and accumulated losses that were only paid off completely in 1997, due to the fact that it was organized and driven mostly by enthusiastic but amateur music fans and volunteers in their spare time. The Sziget festival has since grown to become one of the largest, yearly music and cultural festivals in Europe, offering not just music events but sports arenas, a circus, catered food and cultural exhibitions.

Poster for the first Diáksziget '93

In recent years, the Sziget Festival has grown in popularity within western Europe, with around half of it's visitors arriving from outside Hungary. After Hungarians, the next largest group of visitors are from the Netherlands, with many other visitors travelling from the UK, France, Germany and Italy to experience an exciting week filled with music and culture. Visitor numbers have also increased, with the Sziget Festival receiving approximately 370,000 to 380,000 visitors each year since 2004. The musical acts at Sziget have also greatly diversified, with folk, classical and jazz music artists performing alongside popular rock and electronic music acts. The location has also expanded to include  60 different program venues and 200 programs daily for throughout the week.

In addition to musical acts, the Sziget Festival also provides excellent opportunities to learn about the culture and people of Hungary through exhibits such as the Roma and Jewish tents as well as a multitude of food tents where local Hungarian cuisines may be sampled. Part of the island is also given to civil organizations such as charities, religious groups and non-profit groups to publicize their work. Finally, non-music related theatre and circus performances and exhibitions provide a good break from the music scene for visitors to learn and experience more of uniquely Hungarian music and culture. 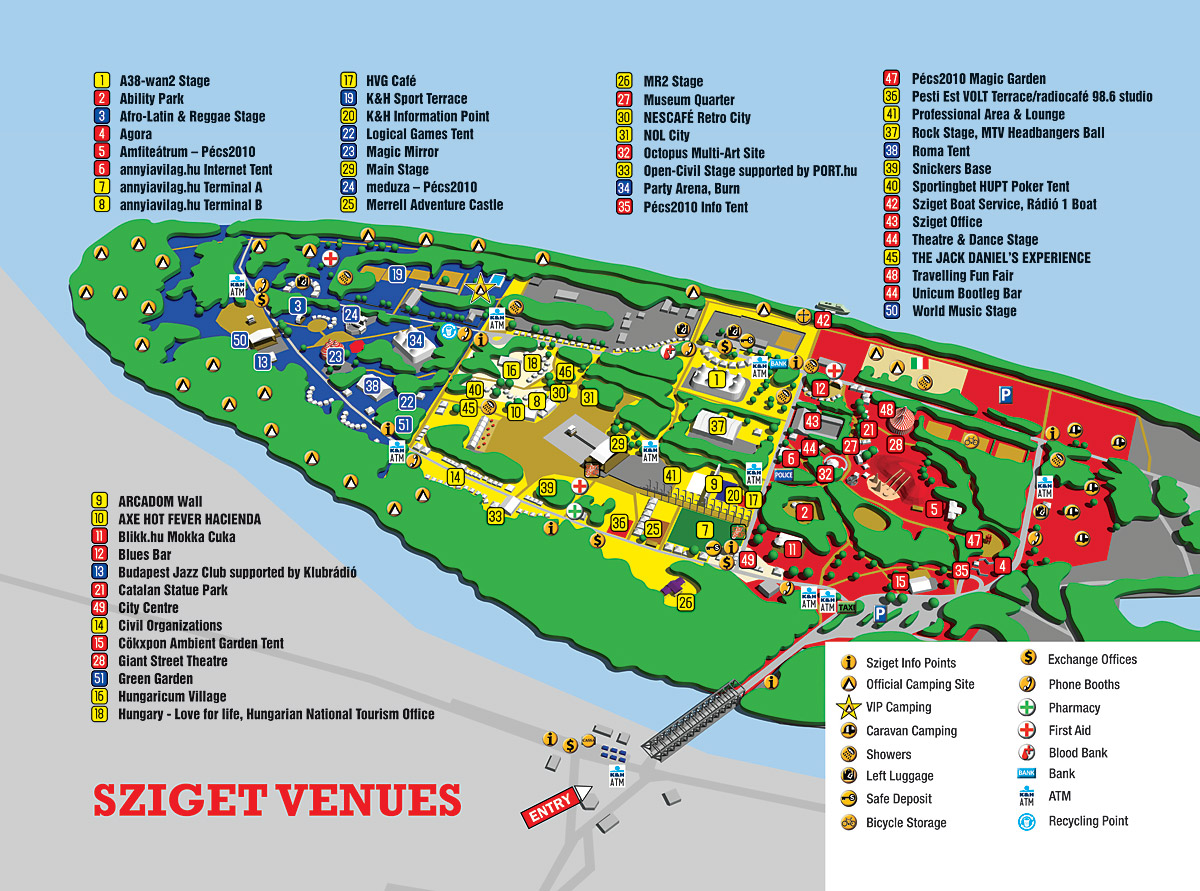 Challenges faced by the Sziget Festival

Being located relatively near to the residential 4th district of Budapest has posed some minor problems for the Sziget Festival due to complaints of noise and disturbances. Dr, Tamas Derce, the mayor of the 4th district of Budapest has previously sued Sziget Festival on the basis that the volume of noise produced disrupted the sleep of locals. This difficulty was accomodated by the Sziget Festival organizers by arranging a shut down of the main stage by 11pm to reduce the amount of sound and noice produce.

The Sziget Festival has also had to deal with security issues, as the island location of the festival has led some festival goers to attempt to access the island through swimming or paddling across the Danube, both of which are equally dangerous acts due to the fast-flowing nature of the Danube that makes it difficult to navigate

A day at the Sziget Festival

"It's a balmy midnight in Hungary and you are walking through a forest lit with fairy lights. To your right there's an impromptu 50s-style sock hop, DJed by a man in a tuxedo who has set up his turntables in the front of an original Mini Cooper that's been cut in half. To your left, delighted whoops are greeting a buff gay dance troupe doing an energetic routine to the strains of Enough Is Enough by Donna Summer and Barbra Streisand. In front of you, a drunk couple who can't be any older than 17 are trying to duet on Paradise City at the heavy metal karaoke. You're just about to make up your mind whether to stick with one of these or proceed to your original destination of the Roma tent, when your nose catches a whiff of chilli noodles, then chicken burrito, and then what appears to be a giant hog roast."

The above extract quoted from an article by reporter Garry Mullohand in the Guardian (Sziget festival: in search of Europe's fields of dreams) describes the sights and sounds that may be experienced at the Sziget Festival. 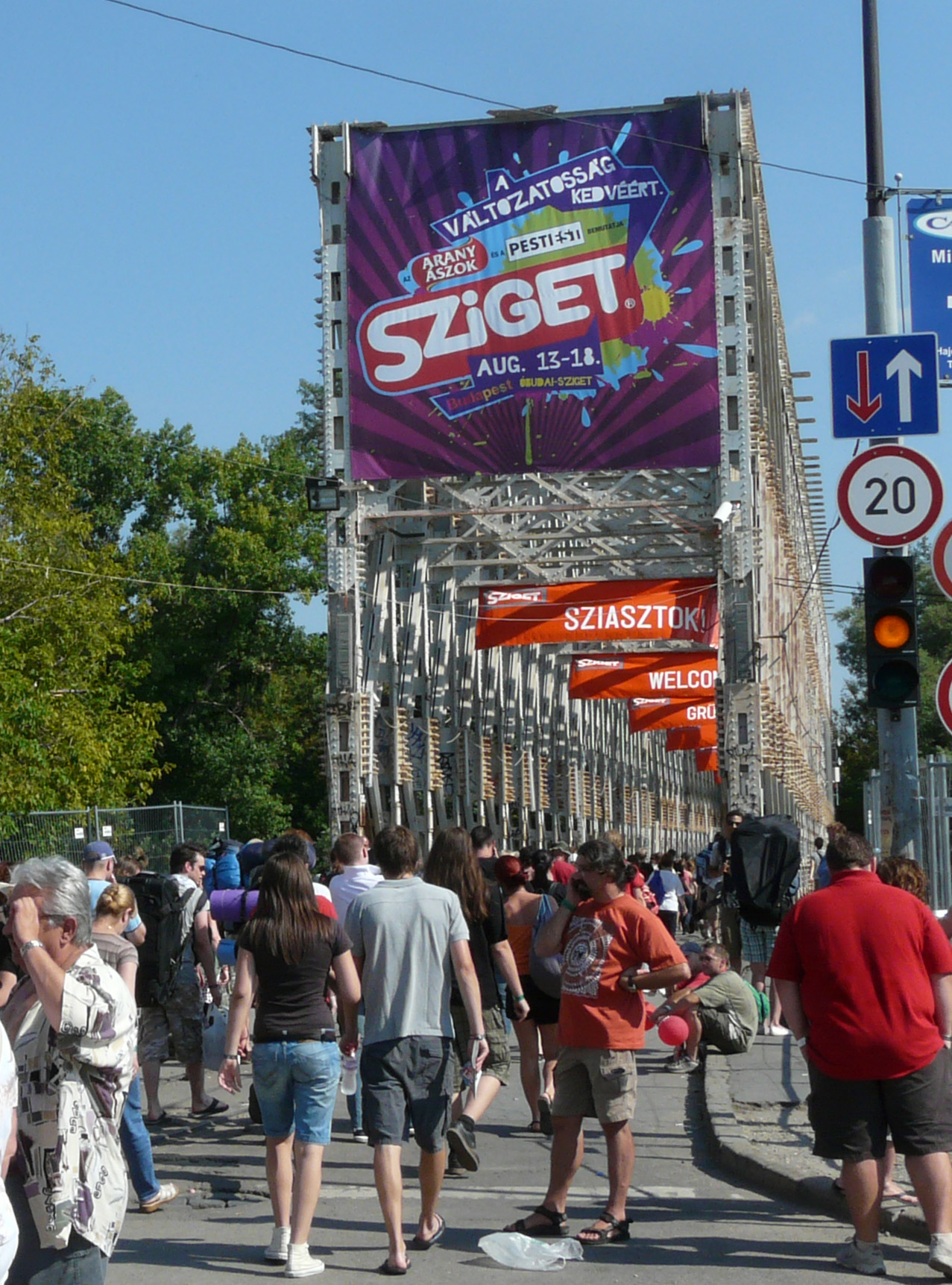